ADMISSION: FREE for members and non-members

Refreshments will be available on the night 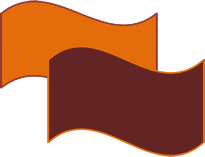 For full details please go to the Meetings and Events page… 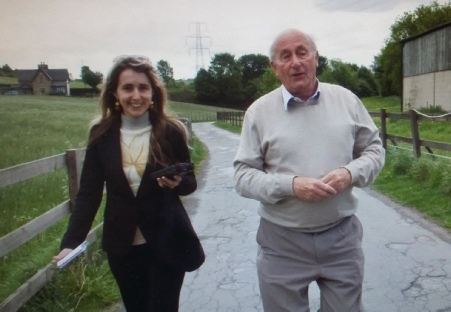 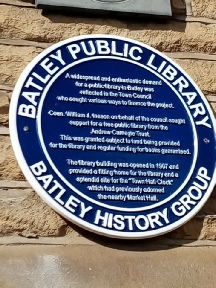 The fourth blue plaque bearing the Batley History Group name was unveiled at the beginning of October. It was a long time in the making but we hope you all agree that it was well worth the wait!

The series of blue plaque commemorations were initially overseen by group member Peter Connor until committee member Steve Turner took over the reins some two years ago now. Peter, along with Steve, fitted the plaque on the Tuesday after the last group meeting and its official unveiling was carried out by Steve himself on Friday October 1st. A small albeit dedicated crowd were there to witness the latest proud addition to our plaques. 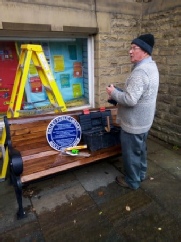 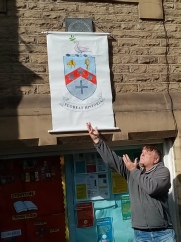 The names of 20 men who lost their lives during the Second World War are to be added to the public memorial in Batley.

During recent commemorations to mark the various anniversary milestones of both World Wars, a small team from Batley History Group have undertaken a project researching all those named on both memorials who died in the 1914-18 and the 1939-45 conflicts.

In the course of their work, the volunteers identified several more names from the First and Second World War omitted from the main Batley and Birstall memorials.

Extensive details of all those who fell, including those not on the memorials, can be found at www.batleysrollofhonour.com.

Kirklees officials have granted permission for the 20 new names to be added, with the support of the local branch of the Royal British Legion.

It is hoped their names will be included in time for the Armistice commemorations on November 11.

Batley History Group would like to trace relatives of those they have identified.

If any are incorrectly spelled, or if anyone would like a name removed from the list, the group can be contacted by email at

history1914@batleysrollofhonour.com by the end of August.

Details of the 20 men whose names have been put forward to be added to the memorials are:

West Yorkshire Regiment (Prince of Wales's Own). He was killed in Action during the France and Belgium Campaign on the 21st May 1940.

Royal Air Force Volunteer Reserve. He was Killed in Action during his service in Rhodesia on 15th March 1944.

Kings Own Scottish Borderers 5th Bn. (Army Catering Corps), Killed on the 3rd March 1945 when his Bren gun carrier exploded a mine.

Served with the York and Lancaster Regiment. Died on the 26th May 1944 when shot by accident in Burma.

Served with the Royal Artillery, 25th Field Regiment. Killed in Action on the 16th July 1944 in North West Europe.

Served with The Army Catering Corps and died at home on the 13th March 1945. 14 days of his army discharge.

Served with the No 1 Special Force SOE. His parent unit was The Queen's Own Cameron Highlanders. He was Killed in Action on the 6th February 1944 at Cassino, Italy.

Killed in action on March 29, 1945, with the Coldstream Guards during the advance towards Germany.

Served with The Royal Engineers, 3rd Cheshire Field Squadron. Killed in Action in the Middle East on the 15th February 1943.

Served with The Reconnaissance Corps, Royal Armoured Corps and was Killed in Action on the 16th April 1945 whilst fighting in Germany.

Served with The Royal Air Force. Died at home of ill health on 9th December 1942 and after about 9 months service (asphyxiated while in an epileptic fit).

Served with The Highland Light Infantry, City of Glasgow Regiment. He died on the 29th December 1939 from illness at Bradford Royal Hospital.

Served with The Royal Armoured Corps, 145 (8th Battalion, The Duke of Wellington's) Regiment. He died of wounds in Italy on the 11th November 1944.

He served with The Princess Charlotte of Wales's (Royal Berkshire Regiment) and was Killed in Action on the 26th February 1944. He was initially reported missing.

Born in Batley but emigrated to Canada in 1930. He then served with The Loyal Edmonton Regiment, R.C.I.C. on outbreak of war. He was Killed in Action on the 24th May 1944 in Italy.

Served with the 2/5th Battalion of The Leicestershire Regiment. He was reported Missing / Killed in Action on the 16th October 1943 in Italy.

Served in the Royal Armoured Corps with The Staffordshire Yeomanry. He was Killed in Action on the 27th October 1942 in Egypt.

Served in the Royal Armoured Corps with 'C' Sqn. 3rd/4th County of London Yeomanry (Sharpshooters). He was Killed in Action on the 20th October 1944 in Belgium.

This research has been carried out by Martin James and further examples of his outstanding work can be found on the Batley’s Roll of Honour page. There is a link at the top of this item or alternatively, the site can be accessed via the links page.

The latest project being worked on by members of the BHG committee is a booklet commemorating each of Batley’s former Mayors.

Just about each Mayor has their portrait on display in the Town Hall and now, it is hoped to put biographies together alongside their portraits for members to enjoy. There are quite a few names to go at and the full list will be put up on the Facebook page of those that the researchers require information upon but, if YOU have any memories yourselves or know the history of these proud servants of our town then please contact us via email or the Facebook page… 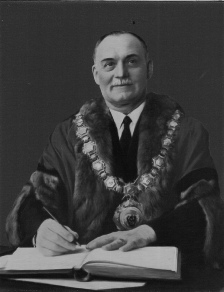 Batley History Group’s Honorary President, Malcolm Haigh, was delighted to receive a copy of Hanna Rose Shell’s book, which she consulted with him personally whilst researching the history of shoddy.

Malcolm was also bowled over somewhat by the lovely letter he received from Hanna thanking him for all of his help.

The book is performing well and we already know that it has stirred a lot of interest from the good people of Batley in the process. 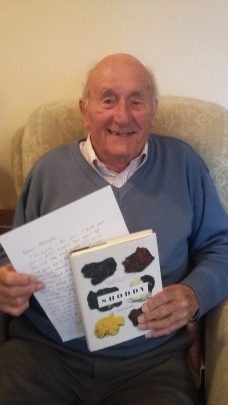 In 2012, a lovely young lady contacted our very own Malcolm Haigh as part of research she was doing into the history of Shoddy.

We are all rightly proud of the pioneering efforts of Benjamin Law that paved the way for this new method of recycling textiles into this new cloth.

Now, the lady in question Hanna Rose Shell has had her book published. The book delves not only to the history of shoddy but the effect it had, and continues to have in the modern age.

Hanna hails from Colorado in the USA and this coming Thursday (24th September), she will be partaking in an online interview to discuss her book in greater detail.

A link has been added for you to see this discussion in full:

We wish Hanna all the greatest of success with her book and will eagerly await reading it ourselves….